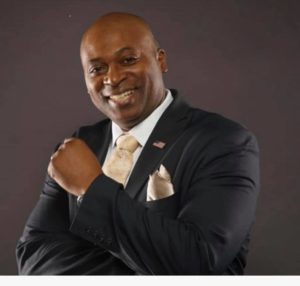 A native of Richmond, VA, he graduated from Huguenot High School and attended University of Virginia and Virginia Union University for engineering. He is married to his soul mate and partner in ministry, Pastor Maria Benjamin, and through their union they have three beautiful children – Delcarmen and Leon Jr., and Destiny Benjamin

Apostle Benjamin accepted his call into the ministry in 1993, serving as junior deacon and minister of Greater Refuge Church of our Lord Jesus Christ and has preached the gospel of Jesus Christ across many lines of denominations, in prisons and on the street corners. As a prophet to the nations, Apostle Leon Benjamin has been given a special message for this age that we live in, bridging the gap between what was and what now is. Apostle Leon was ordained a minister and served as an elder of the Christ Ascension Church International. Apostle Leon Benjamin, by the will of God received his calling to pastor with his wife by his side as associate pastor, where they were the founders of Jireh Ministries International, a non-denominational church and a multi-cultural congregation and is presently named New Life Harvest Church, Inc. Apostle Leon was then affirmed and ordained a pastor by Bishop T.D. Jakes, his spiritual father and mentor in September of 2004 and his desire is that he be used by God to gather the end times harvest and that God will be glorified in all that he does. December 2005, he was consecrated and affirmed Chief Apostle and Presiding Prelate of New Life Harvest Churches, Inc. and Chancellor of Christian Education of Wings of Faith Kingdom Fellowship International by the Honorable Chief Apostle Ron Phillips, chief spiritual leader of the Wings of Faith Kingdom Fellowship International of Bear, Delaware. He has received his bachelor’s degree in Biblical Studies and Masters in Christian Education from Rovear University in 2011. He is currently Chancellor and Founder of Harvest Bible College and Chief Prelate of Receiving Power for Action Apostolic Network which has connected five-fold ministries all across the globe. Apostle Leon Benjamin has also developed a mentoring program for entrepreneurs entitled “Kingdompreneur Now!”. This program works to develop the average person into an entrepreneur who provides products and services to people for profit, with pleasure, to honor the King (Jesus) while promoting the Kingdom. He truly believes that all it takes is “one” to see change and make a difference.

A native of Richmond, VA, she graduated from Huguenot High School and attended Georgetown University for ophthalmology.    She is married to her soul mate and partner in ministry, Apostle Leon Benjamin, Sr., and through their union they have three beautiful children – Delcarmen and Leon Jr., and Destiny Benjamin

Pastor Maria accepted her call into ministry at a very early age of 14, serving as lead drummer (set) in her church at Ebenezer Church of our Lord Jesus Christ. Her interest in music also gravitated to singing in various choirs at national conventions.  Her love for the word of God caused her to accept  her call to preach and currently she leads a women’s movement call Women of Power Ministries.  She has also taught both of her daughters and her son to appreciate music.  Her son plays the keyboards in our worship services and her youngest daughter, Destiny, plays the drum set, while her oldest daughter, Delcarmen, leads the praise and worship team.  Pastor Maria works alongside of her husband, Apostle Leon Benjamin, as Executive Pastor for New Life Harvest Church, Inc., formerly Jireh Ministries International, a multi-cultural church that ministers to the inner-city youth through the church’s daycare and before and after school programs.